We are 2 days away from our flagship State of the Markets event in Dallas on April 26th and the tickets are going fast. With the recent market turmoil, you will not want to miss hearing from award-winning CIOs and Fed soothsayer Danielle DiMartino Booth. We give you access to the best minds in the business, cocktails, and networking all in support of a great cause! We also have an exciting announcement to be shared at the event that you will not want to miss! The registration link may be found here.

I believe we are in the midst of a potentially groundbreaking time for society as a whole and women in particular. The #Metoo movement marks a time when men and women are being exposed to the double standard and abuse that women have experienced in the workplace for years. Today, we may take for granted that women are allowed in the workplace – yes, allowed, but it was not that long ago that women had to fight for their right to earn a living.

Although women have been in the workforce, they were not allowed to access the same jobs as men, and in many societies even to this day, the rights of women are very limited. Today, about 155 countries have at least one law that limits a woman’s economic opportunities and 18 allow husbands to dictate whether women can work at all. The full article can be found here. So while we may have come a long way, baby, there is still much work to be done.

In this country, it was Alexander Hamilton that brought women (and children) into the workforce en masse during the industrial revolution. He wrote that cheap labor in the form of women and children represented the biggest area of opportunity for economic growth, and of course women could stop working in the mill once they were married. After the Civil War, with over 600,000 men dead and injured, women were forced to enter the labor force simply to fill factories and feed their families. This marked the first time female labor leaders called for legislation to improve the conditions for working women. The Great Depression marked a setback for women in the workforce. When unemployment rose to 25%, male-dominated unions revived the argument that only men were entitled to jobs.

World War II permanently shifted the role of women in the workforce. With men going off to war, over six million new women entered the labor force and for the first time they had access to roles that were previously only held by men. After the war, many women were forced to relinquish their jobs to returning veterans, so women were channeled into so called “feminine” occupations including retail sales, nursing, and teaching.

The Civil Rights Act of 1964, which outlawed discrimination based on race, color, religion, sex, or national origin, was the single most important moment for women in the workforce. And amazingly enough, the bill was almost put through without including reference to gender because giving women equal rights was considered controversial. The Civil Rights Act was followed by the establishment of Equal Employment Opportunity Commission in 1965 and finally the Pregnancy Discrimination Act in 1978.

Even with all this legislation and 72 million women in the American workforce today, things are far from copacetic. Despite the fact that women are earning more degrees and advanced degrees than men, the gender pay gap stands around 19.5% on average nationwide and we have a dearth of women in senior roles and on boards of directors despite evidence that companies with more diversity outperform. A recent Time magazine article notes the 5 excuses for the gender pay gap that we can all stop using now. The full article can be found here.

These statistics certainly point to the fact gender discrimination is part of the fabric of our society and the question is why? Where does it start and how do we fix it?

I believe gender inequality starts in the home with how we raise our children. A recent Washington Post article notes that children are apparently “gender detectives, distinguishing between the sexes from as early as 18 months and using that information to guide their behavior, for example by choosing strongly stereotyped toys. And family research shows that men’s attitudes about marital roles, not women’s, are ultimately internalized by both their daughters and their sons. This finding is a testament to kids’ ability to identify implicit power, to parse whose beliefs are more important and therefore worth adopting as their own.” To continue from the article: “what kids make of their father sitting on his phone reading Facebook while their mother scrambles to prepare them for the day? It’s not hard to predict which parent’s personhood those offspring will conclude is more valuable.” So from the get go, we are teaching our children to undervalue women.

It is not only the dynamic between men and women that children observe, it is the messages that we give our girls growing up. From a recent New York Times article titled The Bad News on ‘Good’ Girls notes that: “men have been raised to embrace risk-taking and aggression. Girls are taught to protect themselves from predation, and they internalize the message that they are inherently vulnerable; boys move through the world not nearly as encumbered and certainly not seeing their own bodies as sources of weakness or objects for others’ desires. While girls are being told to protect themselves, too many boys are growing into the men they need to be protected from.” A recent Forbes article notes 7 specific ways parents hurt their daughters future: 1) Girls are taught to be polite and quiet 2) Gender-specific toys aimed at girls are all about appearance 3) Girls are told they are pretty…to the exclusion of everything else 4) Girls are indoctrinated into the princess cult waiting for someone to swoop in and save them 5) Girls see dads take on all the physical tasks around the house 6) Girls only spend time with other girls (with the caveat that girls that attend single-gender schools have higher SAT scores, more confidence and better academic engagement) and 7) Girls hear mothers and other women criticize their bodies. These messages that girls are exposed to over and over again from an early age persuade them that they aren’t good enough and many girls to give up before they even get started.

This video shows illustrates clearly just how differently boys and girls are raised. The brand Always produced the “Like a Girl” video that let children themselves explore the fact that as a society, we use the phrase “Like a Girl” as an insult. The video can be seen here. Their follow-up video, which can be found here, explores how we place limits on girls: don’t do something challenging, girls can’t rescue anyone, girls should be perfect, girls are weak, girls aren’t strong. And on and on. Is it any wonder that girls’ confidence plummets in puberty making her more likely to accept those limitations? This is what it sounds like when girls give up before they even get started before they encouraged to kick through those artificial limitations that society places on us.

I believe that Serena Williams said it best in a recent Vogue interview when speaking about her daughter: “Women are sometimes taught to not dream as big as men. I’m so glad I had a daughter. I want to teach her that there are no limits.” 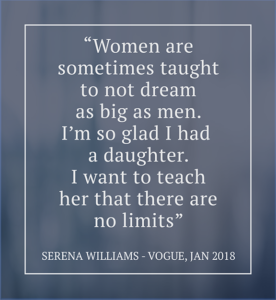 So why do we need to care about this at all? Today, mothers are the primary or sole breadwinners in 40% of households with children under 18 compared with 11% in 1960.The gender pay gap means that more children in the US are going without. So, this is not just a social issue or a ‘men are better than women’ issue, this is an economic issue that affects us all. Placing limits on 51% of the population limits economic growth at a time that we can least afford it. A recent Harvard Business Review article notes that when more women join the workforce, wages rise – including for men. As a society, we need to stop raising our girls with limits; we need to stop putting them in boxes, and instead encourage them to dream big and thrive for all our sakes.

This is the reason that TXWSW has chosen the Young Women’s Preparatory Network as its philanthropy partner. YWPN has from 6th to 12th grade to help economically disadvantaged students explore a world without limits. They accomplish this through a rigorous curriculum focused on STEM education and a college-bound program that starts in sixth grade. The students recite a daily affirmation that builds self-esteem, a sense of purpose and determination to sustain them through the long hours of hard work necessary to pursue their dreams of college and a career. The YWPN network also instills a sense of sisterhood in their 4,500+ students reminding the girls that they aren’t alone on their path to a better future for themselves and their families. The schools teach that drive, hard work and resilience are the keys to success in life and the results they have achieved are nothing less than phenomenal. Today, 100% of YWPN seniors are accepted at a four-year university. 68% of YWPN girls are first-generation college graduates, and YWPN alum are graduating college at 8x the national rate for economically disadvantaged children. So, the network is working. YWPN students are exceeding academic expectations and proving all students, regardless of their background or socio-economic status, can excel if given the right opportunity. In other words, YWPN is producing truly limitless young women.

Ten years ago, when we partnered with YWPN, they were just opening their second school and had several hundred students. Today, there are 8 schools in the network with over 4,500 students, but the need is great, and more schools are in the pipeline, so they need and deserve our support.

Texas ranks 38th in education spending in our nation at a time when our population is growing. Texas also boasts the highest rate of repeat teen pregnancies in the nation. Teen pregnancies cost Texas over $1.1 billion annually and that cost does not factor in lost wages and increased dependence on social services. What YWPN offers our girls is the opportunity to work hard and break the cycle of poverty for herself and her family, and that is something I hope we can all get behind.

With 21% of all children in the US living in poverty, I believe that the way to break the cycle and improve the future for everyone is to focus on raising strong, resilient, and limitless girls. I hope many of you reading this will join us for the event on Thursday where we will share an exciting initiative to support more limitless girls!

We have some terrific events lined up for you in 2018 including our ten-year anniversary celebrations in August! We look forward to seeing you all at an event in 2018! To learn more about our 2018 events, please visit www.txwsw.com.