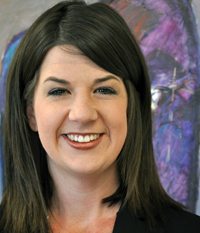 President and CEO at Catholic Charities, Fort Worth

Heather Reynolds is the President and CEO at Catholic Charities Fort Worth (CCFW). Reynolds oversees the strategic direction for the Fort Worth based, $45 million non-profit. With nearly 400 employees and four locations throughout the 28-county diocese, CCFW serves tens of thousands each year through its diverse services, poverty solutions, and income-generating social enterprises.

A 16-year veteran at Catholic Charities Fort Worth, Reynolds has extensive experience in strategic planning, fundraising, and social enterprise. She’s an expert speaker on poverty – both the modern issues and the new solutions – as well as non-profit strategy. She has presented nationally on industry topics, with a focus on moving non-profits forward. In 2014, Reynolds was invited to Capitol Hill by Congressman Paul Ryan to provide congressional testimony on poverty reform before the House Budget Committee. Congressman Ryan later cited Reynolds in his white paper about how to reform welfare in America and used the CCFW model as the example to follow for effective anti-poverty practices.

Under her leadership, CCFW has embodied Catholic teaching and continually takes action to answer the needs of the poorest and vulnerable among us. During the 2014 border crisis, Reynolds doubled the amount of beds in the CCFW shelter in order to house more children. Because of these efforts, the work of CCFW was featured both locally and nationally. This platform allowed CCFW to meet the needs of over 200 vulnerable children.

Reynolds is self-labeled as crazy, always pushing staff to innovate, create, and change more. She challenges employees to end poverty in the North Texas community. (She knows that it’s a failing mission, but that’s the exciting part.) And in going after the impossible, she’s become the driving force behind some of the most spectacular changes in the agency’s 108-year history.

Reynolds has introduced for-profit business ventures to the portfolio of CCFW services, including a translation and interpretation network (TIN). And as a woman who never stops seeking fresh solutions, Reynolds has partnered with Catholic Charities USA and the Lab for Economic Opportunities research team at the University of Notre Dame to launch a new project, the Padua Pilot. Padua is a bold research initiative aimed at demystifying assumptions about poverty and rigorously evaluating the effectiveness of poverty-ending practices.

Reynolds acts as the National Advisor to the USCCB’s Committee on Migration and serves on the Catholic Charities USA Executive Council of Diocesan Directors. In 2012, she was honored as the Center for Nonprofit Management’s Nonprofit CEO of the Year. In 2011, Reynolds was awarded the Benemerenti Medal from Pope Benedict XVI, which is the highest honor a layperson can receive in the Catholic Church.