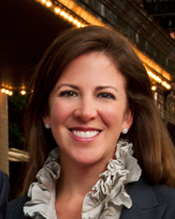 Tricia Linderman joined Texas Capital Bank in 2003 as Senior Vice President of Marketing and Communications where she was instrumental in creating The Best Business Bank in Texas™ brand, managing the highly successful IPO, and supporting the bank’s subsequent growth. She went on to manage special projects for Chairman and CEO Jody Grant until his retirement in 2008.

In 2009, she was asked to create an in-house recruiting group where she oversees the recruiting and on-boarding of the best banking professionals in the state of Texas. She also manages special projects for the bank’s president and executive team.

Prior to Texas Capital, Tricia spent 10 years at EDS (acquired by HP in 2008), where she held government affairs, marketing, and communications roles in Washington, D.C., New York, Atlanta and Dallas. During her tenure at EDS, she was selected to participate in their Loaned Executive Program and worked on the 1993 Inaugural Ceremony for President William J. Clinton as well as managed special events for the U.S.A. Cycling Team during the 1996 Olympic Games in Atlanta.

Tricia graduated from Southern Methodist University in Dallas in 1991. She is actively involved with the SPCA of Texas and was the 2010 recipient of their Lifetime Achievement Award. She also supports the bank’s initiatives in West Dallas and was involved in the early design and fundraising efforts for Klyde Warren Park. Tricia lives and works in Uptown.