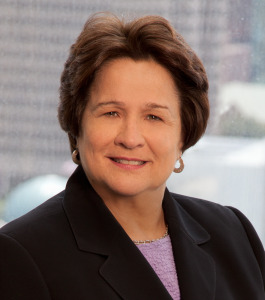 Emily Parker is the Managing Partner of the law firm of Thompson & Knight LLP, where she has practiced tax law for her entire career, except for the period of March 2002-May 2004.  During that period, she served in Washington, D.C. as Deputy Chief Counsel and as Acting Chief Counsel of the Internal Revenue Service, making her the only woman in history to lead the IRS legal team. Throughout her career, she has represented clients in a number of precedent-setting cases that decided important issues and developed previously unsettled issues of tax law for the petroleum industry.

Ms. Parker is consistently recognized for her professional accomplishments. She was elected as the 2007-2008 SMU Dedman School of Law Distinguished Alumni for Government Service, was the first woman and ninth recipient to be honored with the Outstanding Texas Tax Lawyer by the State Bar of Texas Tax Section, the highest award given by the State Bar of Texas Tax Section. She has been selected for inclusion in The Best Lawyers in America® by Woodward/White Inc. (1983-present) and Chambers USA by Chambers & Partners (2006-present), among others.

Actively involved in numerous legal and local organizations, Ms. Parker has served in leadership roles for the American Bar Association Section of Taxation; was a founding member of the Women’s Foundation of Dallas; and regularly volunteers at local organizations, including Dallas CASA, the Child Abuse Prevention Center, Child Care Dallas, and Easter Seals of Dallas.